Yin and yang is the cycle of life — starting with the rise of the sun in the morning where the rays shine straight up. From here, the sun goes higher into the sky creating rays of light that point downwards creating shadows. The sun creates heat, which in turn creates energy and movement. Those items that were in the dark are now in the light.

Later in the day, the same things that were creating a shadow are now in a shadow. The light is heading towards darkness. That which was yang is now becoming yin.

And so the cycle goes — what was yang (light) becomes yin (darkness) and vice versa.

Nature is constantly seeking to balance herself. When the body is sick, it seeks to balance itself. This is healing.

Yin and yang are never static — always moving like the cycle of life.

Everything in life can be understood using the theory of yin and yang. That which is upwards is yang. As a result, the sky, the head and the top of anything are yang while the ground or earth, the feet and the bottom of anything is yin.

Those things, which are strong and bright, such as the sun, a fire, a candle — all yang.

The night sky, darkness, water and other things that are soft — all yin.

Both yin and yang require each other to exists.

Even when there is yin, there is yang. An example would be the moon in the night's sky. Both of which are yin qualities, yet the light reflected from the moon is yang in essence.

Yin and yang are constantly changing — evolving from yin to yang and from yang back to yin. 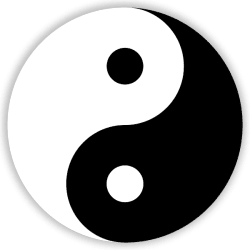 The Chinese symbol for yin and yang is a circle that has been divided by a symmetrical curve.

One half is light, the other half is dark.

You will notice that each portion of the circle is shaped like a tear drop — full at one end while thin at the other.

At any point in the circle, if you were to cut the circle in half, both yin and yang are in balance.

Yin and Yang — Pairs of Opposites

Yin and yang are pairs of opposites, both needing each other to exist.

Here is a small chart of yin and yang qualities:

You've probably noticed how your pets are less active on rainy days, along with you too and how much more active your pets are when the sun is shining.

While some rain is nice, many people start to feel depressed when the rain never ends. On the other hand, too much sun and we get burned making our body too hot leading to sunstroke or heatstroke.

So on the rainy and dark days of winter, we must find a way to bring some yang energy into our life — perhaps hot soup for you and some indoor activity for your pets. On those hot summer days, we need to know when to sit in the shade to take advantage of the yin energy that shade provides.

Both yin and yang must always be in balance — excess either way can lead to health problems.

Yin and Yang and Health

Understanding the basic concept or theory of yin and yang then allows you to understand the basic principles of holistic health and healing.

When the body is sick, there is either too much yin energy or yang energy. To restore health, what we want to do to bring balance back the body. The first step to restoring balance is a wholesome diet. Nutrition and diet are the foundation of all health and healing.