Do not put the coconut into your juicer as you cannot juice a coconut. Instead, this information is being provided because coconut water is a nice drink that can either be drank in combination with your juice or separately.

Coconuts, believe it or not, are naturally buoyant. This is because coconuts have a natural husk around them which floats in water. A coconut, once it drops from the tree, can actually float for up to 10 years in the ocean. This is how coconuts literally traveled (floated) around the world.

Although there are many sources of coconuts now, in my humble opinion, the most delicious coconuts come from Thailand which have a really nice and gentle sweetness to them.

When traveling, especially in Asia, you will often find young coconuts being sold on the street. Instead of drinking a soda, drink a young coconut. Young coconut provides the body with natural electrolytes and moisture. Truly, young coconut water is one of the best naturally occurring beverages.

There are so many benefits to drinking coconut water, including the natural ability to bring oxygen to the cells, raising your metabolism (weight loss), balancing your pH (acidity level), cleansing your digestive tract (you can almost feel the coconut water doing this as coconut water enters your body) and so much more.

Coconut water is a good drink, due to its natural electrolyte capabilities, to have after exercising.

Picture of a Young Coconut 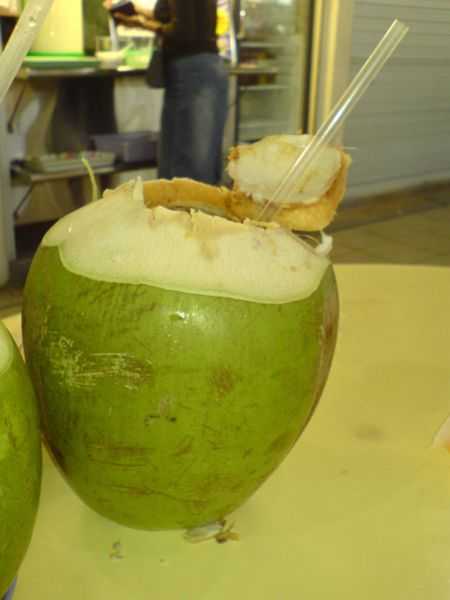 A coconut which has been stripped of its husk. The top has been hacked off and it is shown here as served in a hawker centre in Singapore, with a straw with which to drink the coconut water. In some places it is also called coconut milk. It is very sweet.