Traditionally, durians are not harvested from the tree but instead, they are allowed to fall to the ground. It then takes about 2 to 4 days for the durian to become ripe and then quickly begins to loose its freshness after about 5 or 6 days.

The fruit inside the durian should be creamy–white to a yellowish color.

Durian has a strong odor to it and if kept in a non–ventilated area, someone may think a rat has died behind the walls and is rotting. The odor is, or can be, rather overwhelming. In fact, many hotels, offices and buildings will not allow a person to enter if they have a durian with them!

The smell is rather pungent but this should not deter a person from trying the fruit as the fruit tastes much better than the smell.

If you want to try durian, it is best to go to an Asian market.

Individuals not familiar with traditional Chinese herbal medicine or the philosophy of yin and yang, will be told by someone, "durian is the King of fruits and so drink the juice every day". But this will lead to an imbalance. 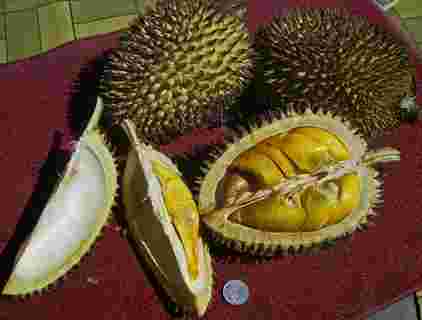