Celery is a natural diuretic.

Celery has a "salty" taste due to its natural organic sodium.

I once bought some organically grown celery straight from the organic farm. It was the darkest green celery I have ever seen in my life. The amount of chlorophyll in celery is directly related to how green the celery is. Anyway, the celery I bought was so green that one bite into the celery was all I could eat. The chlorophyll took over and I could feel the chlorophyll "biting" my tongue.

Unfortunately, most celery available today is lacking color. If possible, grow it yourself or buy it directly from an organic farm. You will be amazed at the difference in taste and ultimately nutrition. But if you do get really dark or darker green celery, do use less as a small amount goes a lot further.

Traditionally, celery juice is mixed with honey to help relieve shoulder pain that is caused due to hypertension.

In traditional Chinese herbal medicine, celery is said to reduce some types of hypertension due to its ability to benefit the liver.

In traditional Chinese herbal medicine, it is said that "anger" affects the liver. Many times a Chinese herbalist might describe a person's liver as having too much "fire". When this is said, it usually indicates that anger has affected the liver. 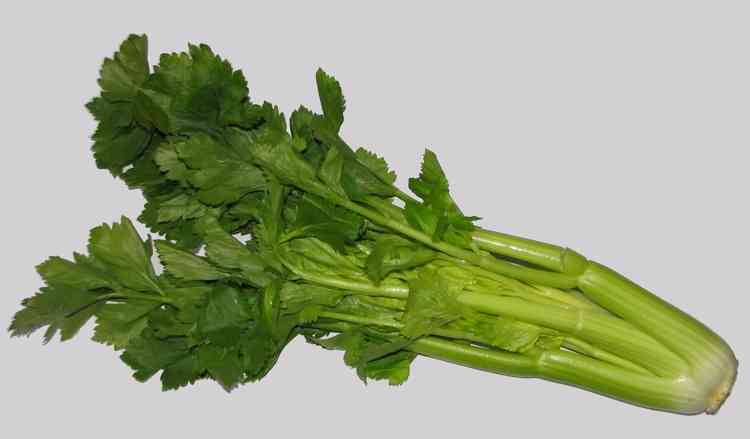 Photo by "Céleri". Licensed under CC BY-SA 3.0 via Wikimedia Commons.