Arugula should have a dark or a healthy color green to the leaves. If yellow, the leaves are no longer fresh.

Due to the fact that arugula is a green juice, you will find it beneficial to have no more than about ¼ of your juice consisting of green juice.

Arugula does have a slight bitter taste to it. As with all bitter tasting vegetables, this indicates that arugula helps to detoxify the body. Therefore, having too much argula juice could potentially cause an imbalance causing to feel the discomforts of detoxifying too fast.

While arugula is often considered a herb due to its strong taste, it is actually a green leafy vegetable that dates back to Roman times. Since arugula does have a strong taste, it is often used in cooking to add flavor or is added to a lettuce salad. Since arugula does have a strong taste and since it is a green leafy vegetable, you will probably find that you won't want the argula juice to be more than ¼ of your juice.

Arugula is an interesting vegetable in that you can potentially consider growing it yourself in a pot. Depending on whether you have a green thumb, you might find it an easy plant to grow. In turn, this allows you to pick fresh arugula leaves whenever you want.

Although arugula does not get the same level of recognition as dandelion leaves, in many ways, arugula is more accessible as many grocery stores sell arugula leaves and/or you can easily grow it yourself (of course, you can grow dandelion leaves quite easily too because it does grow like a weed and requires very little, if any, maintenance).

Oddly enough, arugula has a shape similar to that of dandelion leaves too.

As with any green leafy vegetable that has a slight bitter taste to it, the younger and/or smaller the leaves, the less bitter the taste. Most grocery stores sell baby arugula and if you grow arugula yourself, then you will probably find it advantageous to pick the leaves at a relatively younger age. Of course, you will know by the bitterness if you should pick the leaves younger or not. 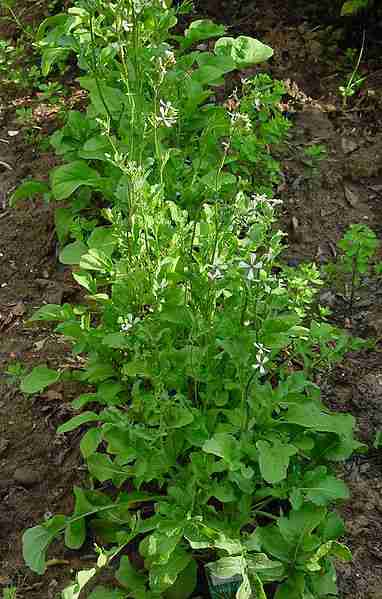